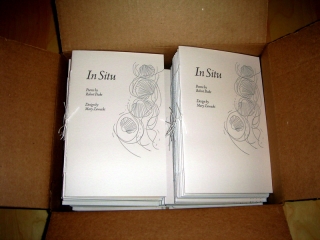 This afternoon felt like Christmas. Except that Santa pulled up to our place in a black Thunderbird, on time as usual for her piano lesson with my wife. And instead of a red velvet sack, she came in cradling a small cardboard box. Inside were the fruits of many months of painstaking labor: sixty eight limited-edition letterpress chapbooks of my poems, each hand-bound, numbered, and signed.

The process began in September of last year, when Mary Zawacki, an accomplished graphic designer and talented amateur pianist, asked if she could use a few short poems to practice hand-set typography in a letterpress class she was taking with Gerald Lange at Otis College of Art and Design. 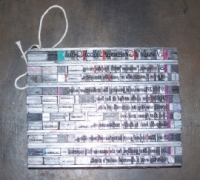 The thought of someone spending so much time with my poems in setting them–aligning each letter carefully, even as I had carefully chosen each word–felt like an honor. The process, and the result, were remarkable. However, because some of the tiny metal letters had been used more often in other print runs than their companions on the plates containing my poems, some letters were minutely more worn than others, producing a slightly uneven tone when inked and pressed to paper. For Mary, this just wouldn’t do. 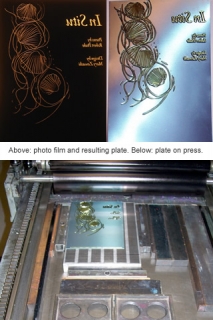 But this “setback” only opened new vistas. Mary used a digital version of the same font1, along with her own beautiful hand-drawn line illustrations inspired by each poem, to lay out the pages digitally. Then these designs were developed on photo film. The film was laid against a metal plate coated with a special polymer, and exposed to light. The light-exposed polymer hardened, and the rest simply washed away with water (a far less toxic option than, say, the metal-etching acids William Blake was accustomed to using). The resulting plates, containing both my poems and their well-matched illustrations, became the pages and cover of this book arts book.

The chapbook contains three poems, including the poem that was a finalist in last year’s James Hearst Poetry Prize. The settings can only be described as perfect: from the illustrations, which add to the text, to the layout, the paper, and the three-hole string hand-binding. I am deeply grateful for this act of creative generosity, and for the opportunity to collaborate with such a wonderful artist.

1A note about the font: Monotype Arrighi was designed by Frederic Warde in the early 1920s after the original design by Ludovico degli Arrighi in 1524.