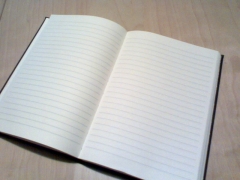 I now recognize that in my work I have had a tendency to want to end a poem after delivering a few good lines, to “look ahead” to the conclusion and shape the direction toward that end. Reading Marvin Bell’s “Dead Man” poems, which always appear in two parts, helped me recognize just how much can still be said even after the conclusion of the first part of a poem. In some ways, every poem could be said to be just the first part of a poem on that topic.

Reading other longer works has also helped me understand how I might go about resisting conclusions in the effort at arriving in more interesting poetic territory. Being halfway through my third semester in the Pacific University MFA program, I have now read over fifty books of poetry and poetry criticism in the last fifteen months of study. I have learned a lot. Perhaps more importantly, I have absorbed a lot, imbibing poetry as much as analyzing it, and letting it shape my aesthetics from the inside out.

Most recently, I have been reading David St. John’s Study For The World’s Body. I am struck by the success of his longer poems. Comparing his work to another poet whose longer poems I also admire, Li-Young Lee, has helped me to understand some of the qualities of longer poems which I hope to deploy in my own efforts at breaking the single-page barrier.

Foremost among them seems to be a tone that reflects confidence. This sense of confidence about the speaker, and by inference the author, helps me as a reader to give the author permission to dwell on unfolding details, provided they remain grounded in concrete images, interesting language, music, or other elements of good craft. Careful examination of details in this way produces the actual poetry, and gives a sense of focus and precision to the work, despite its length.

The stand-up comedian Billy Connolly is a master at delivering humor through seemingly endless digressions. When he finally comes back to the main topic, long since forgotten in the audience’s mind, he earns not only laughs but trust that he knew what he was doing all along. Good long poems can also function in this way–taking time to deliver poetry through the details, but retaining a sense of focus and direction all along.

In some ways, it seems to me that longer poems do not necessarily have to end on lines as spectacular as those required for the success of shorter poems. A rider who has hung on to a bucking stallion with dignity and tenacity need not necessarily dismount with great flourish to win cheers. The sustained quality and duration of the work is a feat in itself. Such feats I look forward to attempting in practice soon.