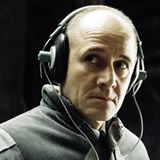 German actor Ulrich Mühe passed away last weekend due to stomach cancer at the age of 54. His performance in The Lives of Others had a profound impact on my renewed understanding of the importance of art in difficult times. His life off-stage and off-camera seems to have been equally fraught with troubles, as he believed one of his wives to have been a Stasi informant not unlike Martina Gedeck’s character in the film. Perhaps in part due to the immense personal history he brought to the role, the believable humanization of Captain Gerd Weisler may well be the role for which Mr. Mühe will be best remembered internationally.