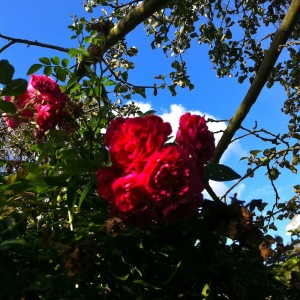 The business of poetry (or “po’ biz”) is a well-established but much-bemoaned part of sustaining a career in poetry, including self-promotion and business networking. But its converse — the idea that there is actually a poetry to business — is something I suspect few professionals outside the arts have paused to consider. Running a career in IT and management consulting alongside a vocation reading, writing, editing and publishing contemporary poetry, I have spent a lot of time not only thinking about, but inhabiting, the parallels.

That is why I was pleased to see a recent article on “The Benefits of Poetry for Professionals” gaining attention on the HBR Blog. I agree heartily that poetry can help develop compassion and creativity. However, I disagree with the idea that poets “simplify” complexity, but would instead suggest that they are able to understand complexity by embracing it. Likewise, I consider poets not so much “systems thinkers” but “systems embracers” — including even the paradoxical aspects of the system.
END_OF_DOCUMENT_TOKEN_TO_BE_REPLACED

“I have become comfortably numb.”

When I commute into the city centre, I often take a book of poems. I read them eagerly on the way in to work. But after a long day wrestling with technical, logistical, and managerial issues, on the return journey I will invariably whip out my phone and tap away mindlessly at video games.

Certainly, energy is one factor in this pattern. Poetry demands attention (and good poetry rewards it in equal or greater measure); video games demand little but give back instantly in pleasurable (but short-lived) bursts. So, perhaps when I have less to give, I settle for the lightweight option. But this doesn’t explain the pattern entirely, because I often read and enjoy poems in the comfort of my own home when I am equally or even more tired — and I rarely play video games except to “kill time.”

The other factor is how incredibly uncomfortable I find being crammed into a tube carriage with strangers. Many people seem to take it in stride; for me every second counts. More than once, while playing video games, I have missed my interchange or only just looked up in time to get off at my stop. The stimulation and quick reward cycles of video games speed time up, which is exactly what I want at the end of a long day — to fast-forward through the unpleasant commute home.

Tuesday marks the one-year anniversary of my arrival in London. This afternoon I attended a reading at Keats House in Hampstead. Four volunteers read poems and excerpts from his letters dealing with the concept of Negative Capability. This ability to remain “in uncertainties, mysteries, doubts, without any irritable reaching after fact and reason” is something I have cultivated in my writing process, and admired in the work of others. However, it occurs to me that living in London has exercised this quality in my life as well.

My first time living abroad has also been my first time living outside of California. Stepping off the curb while looking in the habitual (but wrong!) direction can cause a visceral shock. But the same can happen in conversation. Learning to navigate the labyrinthine streets of London can feel stressful and overwhelming. Likewise, the literary terrain. And semiotic estrangement produced at least one new poem.

Challenged with startling newness, the temptation is to make a split-second decision: either “they” are doing it wrong, or I am. But neither decision is sustainable, or leads to positive adjustment (for there are more of “them” than me, but in the end, I have to live with myself). So instead, I have been repeating my English wife’s third-way statement, which she used extensively while living in California: “not wrong, just different.” This in itself expands my capacity to abide the contradictory.

Also, faced with so much newness, the temptation is often to compartmentalise. END_OF_DOCUMENT_TOKEN_TO_BE_REPLACED

“A poem is a provisional darning across that [psychic] tear.”

Behind Jane Hirshfield, drizzle smeared the windows framing London’s icons to make an impressionist painting. She read generously from new work and old standards, and even revealed some personal detail when asked about the significance of a particular poem in the Q&A. Though myself a former Berkeleyite, I had never heard her read in person. How marvelous to encounter her six thousand miles away. Though confident and grounded, she seemed to be appreciating the poetry alongside us, rather than reinforcing the fourth wall.

In her writing process, Jane embraces negative capability, transience and paradox. For her poetry, like Zen, is about eschewing shorthand categories and embracing the moment with keen observation. Though encompassing, and often wildly associative, the work always seems sure-footed — braiding narrative and philosophy, imagery and music — and always lands in interesting territory, often far from the starting point. Increasingly political, her poems never forget to “tell it slant”, and that poetry always wins out over rhetoric for the purpose of expanding the mind.

What lovely wounds and beautiful scars; what wholeness she weaves from fleeting threads — a magnificent magpie poet, gentle spirit and kindhearted kin.

“Then what are we fighting for?”

-Attributed to Winston Churchill, in response to a suggestion that arts education be cut to fund the war effort.

There has been a furor over recent cuts in humanities education at the university level in America. Most of the counter-arguments for keeping the humanities alive play out the “transferable skills” angle. My wife, a piano teacher, knows these arguments all too well — that learning to play an instrument accelerates childhood brain development, and that music actually teaches certain kinds of mathematical reasoning (such as fractions).  Likewise, with literature, English departments often underscore the importance of “soft skills” like communication.

But in the end, this line of thinking only lends strength to the argument to, for example, replace courses in Shakespeare with more practical courses in business and technical writing. It is also not difficult to imagine games designed by psychologists to more effectively deliver specific, developmental results than learning to playing Bach partitas ever will. Clearly, the argument that the humanities can deliver practical, bottom-line results is problematic. Why, then, are they so critical in difficult times?
END_OF_DOCUMENT_TOKEN_TO_BE_REPLACED

“To fully understand poetry, we must first be fluent with its meter, rhyme and figures of speech, then ask two questions: 1) How artfully has the objective of the poem been rendered and 2) How important is that objective? Question one rates the poem’s perfection; question two rates its importance. And once these questions have been answered, determining the poem’s greatness becomes a relatively simple matter.” A recent comment by a fellow poet on my post about negative capability got me thinking about the dance between the known and the unknown in the creative act. Alejandro Escude points out that some poets seem to “have something to say and say it” rather than adopting a “neither here nor there approach.” He mentions poets in either camp that share certain stylistic qualities with their comrades in the same camp. And while I agree that William Stafford writes a very different kind of poetry than Sharon Olds, I still believe that it is actually negative capability that makes both of them first-rate poets.

In an early scene of the film version of Dead Poets Society, Robin Williams encourages his students to rip out the introduction to their set-text poetry anthology written by the fictitious J. Evans Pritchard, PhD. Dr. Pritchard’s essay is a striking, if hyperbolic, example of how literary criticism can stray so far from the creative act as to reduce the experience of a poem to an exercise in mathematical graphs. The repeated use of the word “objective” in relation to poetry — its “importance,” and how “artfully” it is “rendered” — makes me laugh every time.