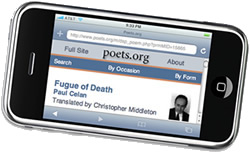 The Academy Of American Poets recently announced their mobile poetry website, complete with numerous poems arranged by theme or occasion and by form. Now, if anyone accuses you of being shallow, you can call up Paul Celan’s “Fugue of Death” on your iPhone, recite a few lines, and quickly prove them wrong. 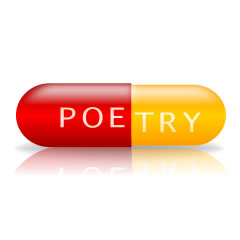 Notice a pattern? I do. National months are only declared for causes that socially-minded people think ought to receive more attention. That is to say, they are things we should pay more attention to — like our health, giving blood, recognizing the plight of others — good, noble causes that would simply get swept by the wayside were it not for (and sometimes still in spite of) assigning this cause to one of the twelve calendar months in an attempt to raise awareness.

In marketing there is the taxonomy of medicine, vitamins and candy. Any product is usually most like one of these three. Plumbing services to fix a broken pipe, for example, are medicine — fulfilling an immediate, expressed need. Cable Television is mostly candy — entertainment that looks and tastes good. A gym membership would be like vitamins. And poetry, unfortunately, by virtue of having been trotted out in classrooms on its national month once a year for the past eleven years, has proved itself to also be perceived most like vitamins — good for you, and you know it — but an awful lot harder to sell than medicine or candy.
END_OF_DOCUMENT_TOKEN_TO_BE_REPLACED