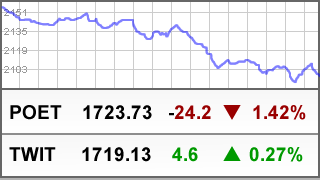 The current economic recession is my generation’s wake-up call about the difference between promise and lasting value. Whether we heed the call remains to be seen. The promise of ubiquitous home ownership, “money for nothing” investment strategies, and consumption founded on debt has collapsed. Some undoubtedly hope that we will be able to return to our collusion of shortsightedness soon. I hope, instead, that we can learn from this time to focus on more lasting foundations of value, which includes making responsible choices, and being grateful for the things that matter most in life.

Poetry, too, suffered a similar collapse. With the advent of rock ‘n’ roll, the mainstream audiences for both classical music and poetry went that way. And yet, fifty years later, I still detect a strange undercurrent of hope, among those deeply involved with poetry, that somehow poetry will recover its mainstream prominence. After all, we traditionally look to our national poets laureate to devise projects to increase poetry’s appreciation. Ted Kooser started the American Life in Poetry column to get poems back into local newspapers, and Robert Pinsky encouraged people to get together to read poems as part of the Favorite Poem Project. All of these efforts are commendable, and no doubt good for both poetry and society. Yet projects like these and countless others seem to indicate an underlying hope against hope that poetry can somehow regain its former glory.

I can understand how anyone who has experienced the transformative power of this medium could be subject to a streak of evangelistic zeal. Yet buying in to the belief that poetry’s “recovery” lies around the next bend seems as naïve as the hunger toward promise that fuels the who-wants-to-be-a-millionaire-or-pop-idol reality entertainment industry. That is, there isn’t much reality there–only the perpetual promise: instant gratification, just ahead.

And, strange as it sounds, poetry doesn’t really need us. It has been getting along just fine for centuries, simmering quietly through decadent times, bubbling over in periods of enlightenment. Yet in every age there have been those who smell its aroma, and hunger for its sustenance. For them, the desire to write springs from a desire to take part in this timeless conversation, as naturally as smelling something delicious provokes an appetite.

For others, it is more an act of nostalgia, an exercise in self-image, outlet for self-expression, or a truly misguided avenue toward personal prominence. To them I say: there are easier means to external success–be it money, respect, or mystique that you crave–than writing poems. There are more directly impactful ways, too, to contribute to social good. I don’t know if poetry can save the world. But I know that it has saved me in my world. I don’t know if it will ever return to prominence in the hearts and minds of the mainstream public. But it has returned to its rightful place in my life. And that is, unquestionably, a lesson I hold dear.