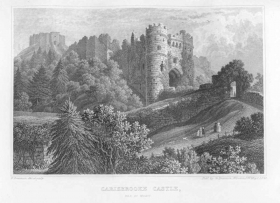 Had a great trip down to the South coast, the highlight being a sword fight with a four-year-old on the bowling green of Carisbrooke Castle. We crossed the Solent in the kind of gale that threatened the Fastnet Race. Unfortunately, that meant we couldn’t take the hovercraft–but the fast catamaran only pitched and rolled during the slow going in and out of port. Good thing, too–Val and I were stuffed on two enormous portions (“Those are the mediums?!”) of fish & chips as well as tea and Turkish delight.

I have been reading Zbigniew Herbert on the train, trying to get past the translation. Apart from stunning poems like “Five Men” and “The Pebble,” most of the poems I have read so far smack of romantic Slavic intillectualism and an out-of-tune surrealism. I wonder if his work focuses more on language and lyric device to make what seem like generalizations come alive in new (linguistic) ways. In any case, it is a far cry from Adam Zagajewski, whose poems in Mysticism For Beginners are tight and self-contained–a kind of Eastern European Ted Koozer with a deeper connection to history and a more philosophical bent. Still, I’m ploughing through Herbert poems by the hundreds, hoping to get more inside this poet, hoping to read beyond the language barrier and into the mind of the man that has written poems that make my jaw drop open with their fierce, unflinching gaze.

Meanwhile, it is evident that since I was here three years ago, Polish people have immigrated to the UK in great numbers. There are now Polish grocers and restaurants just down the street. On the tube today, young Poles were poring over a glossy Polish-language magazine sporting the latest PC gaming equipment and games. According to Czeslaw Milosz, the Polish that contemporary poets employ is only nominally different from its medieval counterpart–making their poetic tradition vastly more accessible and vibrant than our own. (Imagine if Chaucer and Shakespeare wrote in English-as-we-know-it.)

I have gained tremendously from reading Polish poets. Their sense of identity has only been strengthened by centuries of occupation. The poets I have read so far seem at once world-weary and yet, unlike some European counterparts, unwilling to rely upon irony alone as a response to the difficulties of life. They kindle a kind of wise, bold, at times harrowing hope in their literature. The writing is fierce yet thoughtful–no time for pleasantries or showing off.

I am drawn to this generation of Polish poets coming to terms with the horrors of World War II in their country even as I am drawn to poetry as a means to reconcile some of the most challenging events in my personal life. I know English is a language that accepts and absorbs–that is why, for example, it is so irregular. I only hope that the English literary tradition can benefit from the current Polish influx as I have benefitted personally from coming to know the works of outstanding Polish poets.