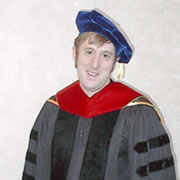 I received special permission from Pacific to miss a day of the MFA residency yesterday to walk in the Peace Theological Seminary & College of Philosophy Doctorate of Spiritual Science commencement ceremony in Los Angeles.

I enrolled in the Masters of Spiritual Science program concurrently with my last semester at Berkeley in 1999. After finishing my undergraduate degree, I moved down to L.A. and spent the next four years living and working at the seminary headquarters. Then I met Val, moved out and got married. I eventually completed the five years of coursework (two Masters, three Doctorate) but had not yet finished my Practical Treatise.

When James passed away, the methodologies I had discovered and refined in the Doctorate program became a lifeline for me. I finished the personal and repeatability study, wrote the Treatise, and graduated earlier today. It has been a remarkable seven-year journey. And now, after a long flight back to Oregon–including a delayed flight during the layover in San Francisco–it’s time for bed.