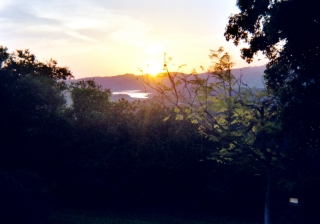 The 2007 Ojai Poetry Festival has come and gone. Whew! We started deep planning back in 2006–and the day-and-a-half of readings and discussions, as well as all the between-the-lines schmoozing and feasting–absolutely flew by. It was great to have Sandra Alcosser in town. She teaches at Pacific, and I was really impressed, during the January residency, with her generosity and keen interest in each student’s development. She gave up her lunch hours to meet with us individually and discuss the larger project of our work as a whole. A truly delightful woman, and a force to be reckoned with in the intersection between environmentalism and art.

She gave a dynamite reading alongside Sherman Alexie on Friday night. Alexie is a natural entertainer and wry comedian. He interspersed observational humor into poems of deep pathos about growing up on the reservation. He rarely missed an opportunity to quip about the insular attitudes of white liberals or to denounce himself as a “bad indian” for his modern urban lifestyle. He is no doubt a complex person grappling with many issues both personal and universal, articulating through the funny and poignant, glib and sincere.

María Meléndez read from what can only be called the most experimental body of work in the group–involving song, audience participation, word fragments and pictograms (such as a hand with upraised middle finger) printed in the middle of her poems. Alongside Alcosser and Gary Snyder, she spoke about the intersection of art and science during the Saturday morning panel. This is a topic squarely in Alcosser’s domain as well, who is fresh from a project of choosing nature poems to display in Central Park–a project which is reputed to have raised environmental awareness by 48% among the park’s four million visitors per year.

A host of outstanding regional poets read on Saturday afternoon–equally eclectic and engaging. The festival closed on Sunday night with Gary Snyder reading at length from Danger on Peaks and discussing the environmental implications of poetry and Buddhist philosophy–including how hope and compassion can reign even in the face of death. Both evenings all four poets were joined by a chorus of spring peepers, crickets and birds. Sunday night we were also treated to Venus in almost perfect conjunction with a crescent moon–like a great question mark blazing in the night sky.

I am grateful for having played my small part in bringing this festival to Ojai for another season and, frankly, glad to know it is all done–and done well. Thanks to all four poets for gracing us with their presences, to the regional poets and all the tireless organizers and volunteers–especially Tami Haggard and Jim Lenfestey–for bringing another magical season of poetry to Ojai’s Libbey Bowl.