“The Silence Teacher is entirely remarkable for its dignity, its beauty, its many strengths of word and of witness. Robert Peake’s lines and images polish the hardest of grief-stones until it gleams, until it becomes almost bearable to hold. Here is poetry’s task and gift to us — untransformable loss made malleable and sustaining by the ways it is met, said, and seen.”

“If one locked a mute into the bell of a trumpet, changing the color of its song, its spectral envelope, one might approximate the timbre of Robert Peake’s threnody. Anyone who hears this wailing song written by a father for a son’s brief life will be haunted by its beauty and restraint.”

— Sandra Alcosser, author of Except by Nature

Written in the seven years following the death of the author’s infant son, these poems explore the sometimes quiet and often startling nature of love and grief. Through a range of forms and panoply of figures—spiders, fish, a famous cellist, and prophetic apparitions—this collection probes what William Faulkner called, “the human heart in conflict with itself.” 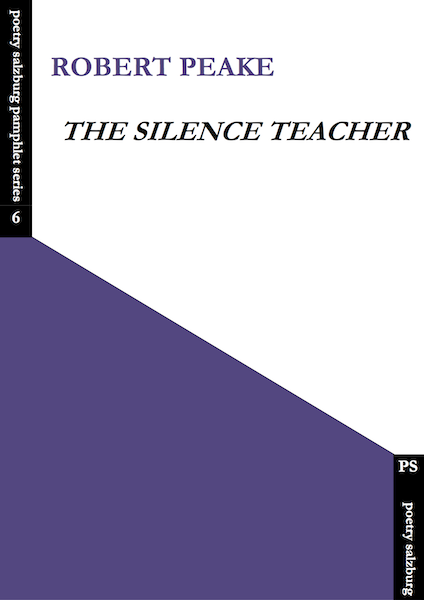 “If all poetry is essentially about love and loss then there is little need to read beyond Robert Peake’s beautiful and heart-breaking pamphlet, The Silence Teacher … These highly-crafted, long-considered poems have so much emotional resonance, from a father who will not teach his son hello, whose son ‘came in waving goodbye’.”

“In consistently even, deeply muted tones, The Silence Teacher is a self-contained world … an uneasy, affecting and unforgettable collection.”

“The Silence Teacher lives up to this author’s reputation as a keen, sentient observer and is a heroic account of a father’s journey dealing with death.”

“After reading The Silence Teacher, I have a more emotional stake in living, and in loving. A haunting collection.”

“The Silence Teacher shows Robert Peake to be a gifted and courageous poet … These are poems that demanded to be written and now they insist quietly but firmly that they be read, reread and read again.”

“What is so stunning about the slim book is how much emotional depth it requires to read. One of the greatest challenges is to face loss by elucidating the brighter moments it cannot rob, and that is what The Silence Teacher does.”

“This pamphlet carries out its work lyrically, tersely, deftly, in poems that are restrained but also spill, slowly, down the page … Most pamphlets (let alone full collections) have at least a couple of weaker poems somewhere in the middle; this one doesn’t.”

— Fiona Moore, author of The Only Reason for Time